I am happy & consider myself rich with what I’ve been able to obtain.

Hello, my name is Myra Curiel and I entered the foster system when I was 14 years old. My story is probably no different from my peers. Amongst everything, I can assure you there was emotional, physical, verbal, and sexual abuse along the way. Many are still fighting demons from the past; some may be fighting them the wrong way with drugs and alcohol abuse, but others wake up and make the best of each day, which is all anyone could ever ask for. One way or another, there was someone who helped us get out of the troublesome situation we were once in. Above all, we are survivors.

A few years ago, I came across a Groucho Marx quote that has been my motto: “Each morning when I open my eyes I say to myself: I, not events, have the power to make me happy or unhappy today. I can choose which it shall be. Yesterday is dead, tomorrow hasn’t arrived yet. I have just one day, today, and I am going to be happy in it.”  You see, I have come to realize that it was not my fault for the programming and environment in my childhood. However, as an adult, I am 100 percent responsible for what happens next, because I would be giving power to my oppressors if I did not fix it.

At the age of 14, my life as I knew it came crumbling down in front of my own eyes. I came to experience foster care for the first time, a concept to which I was previously oblivious. I was the only child in my family to be removed due to physical, verbal, and sexual abuse. I finally had the courage to speak up about the abuse, thanks to my tutors who encouraged me to take a stand. As a result, I was taken to the hospital and went through something I wish no child has to ever experience. But if I had never gone through these circumstances, I would have not have met two very important people.

I give thanks to God for Omar and Bithiah, my former tutors, who have been there for me since I confided to them about the abuse. They ended up becoming my first foster parents after I had been at Polinsky Children’s Center for a month. It feels weird putting that title on them, since they were just tutors before everything happened…but it is thanks to them that I am who I am today. I learned patience, forgiveness, and what love was for a child. I never felt judged or that I had to hide my feelings. They allowed me to express myself freely and without fear. 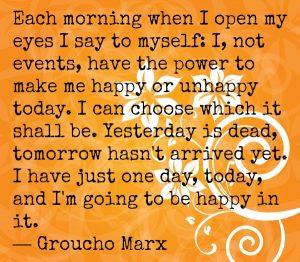 I was saddened the day I had to leave them because my social worker and biological parents thought I was being brainwashed. I found this to be one of the worst decisions made while I was in foster care. Though I understood the social worker’s reasoning, I don’t think she truly heard me when I told her that I didn’t want to go back with my parents. I believe she felt sorry for them because she would see the changes and efforts my parents were making to try and get me back. While I admit I could see my parents were trying to change, I also knew stepping foot back in their house meant being attacked by questions and treated like the black sheep, which I had no intention of being. Yet my social worker saw these as excuses my foster parents were putting into my head. She didn’t see that I was doing well emotionally, in my academics, and in therapy sessions. She thought my attitude towards my parents would soften if I changed placements. So to my second foster home I went…

I tried my best to comply with my new foster parents and their house rules. Still, I experimented with drugs, ditched classes, and didn’t really care in my sophomore year of high school. I was accused of being racist and lesbian from my new foster mother, who I was supposedly placed with because we shared the same faith (not that it was any comfort to me). Soon after, I was assigned to a new social worker who placed me at San Pasqual Academy, a residential education campus in Escondido that would be my home for two years until I emancipated from the foster care system.

I met many people with a range of personalities while at San Pasqual. Their attitude and character taught me to understand why some people act the way they do and why they are the way they are. They taught me to be patient and forgiving and to see someone not just for their outside appearance, but also for their soul. When I come across someone rude and disrespectful, I do not believe that is who they really are. Rather, I see it as the person they become when they want to protect themselves from being hurt, because that is how they have been taught to fight their demons.

When I graduated from San Pasqual Academy in June 2010, I reunited with Omar and Bithiah. I was so happy to be back with the family that initially showed me genuine love and affection, and who helped me grow and persevere through my four years in foster care. To this day, I can’t thank them enough for what they have done for me and I know I can always count on them to be there for me!

I am not only thankful to them but the Garcias, as well. Efrain, Irma, Jose, and Yuritzi willingly and lovingly treated me as their own child and sister over the years. I can’t even begin to describe my immense gratitude. Thank you so much!

When I was 19, I decided to move out on my own and discover what adulthood was really like. In August 2011, I moved to Oceanside to enroll in Casa de Amparo’s New Directions transitional housing program. When I first arrived, I had no job. All I had were my car, clothes, some books, two towels and a blanket. I wasn’t sure whom I was going to turn to for help when I needed it, since all my family and friends were in downtown San Diego. While they were only 45 minutes away, my pride and ego believed it would’ve been ridiculous to ask for help when I was trying to prove I could be an independent young woman.

The day I moved into my apartment, I was pleasantly surprised to be greeted with a gift basket that had all the essentials one would need to get started: shampoo, washcloths, laundry detergent, utensils, plates, cups, feminine products, bed spreads and a few other things. I was so grateful for everything that Penny Hagler, the New Directions housing specialist, had provided. I initially thought how nice it was for all transitional housing programs to do this for their youth. I found out later that this was not the case; peers from other programs would often tell me they did not always get the things New Directions residents received through Casa de Amparo. 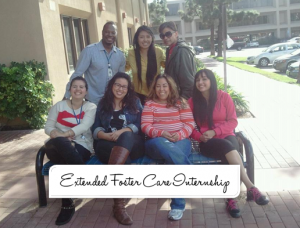 This gift basket is where the idea of the “Move-In Kit” came to me a year later when I was interning with AB12 and Extended Foster Care at San Diego County. I would often hear from my peers the struggle they had when first moving in and getting the very basic essentials, such as shampoo, dish soap, or even toilet paper. That’s right: even something as seemingly attainable as having toilet paper can be impossible for others. I thought it would be great to share my idea with Walfredo Don, my supervisor at the County, and Omar Mikhail, co-founder of Power of Change, a non-profit dedicated to improving the lives of underprivileged children.

I never really thought the idea would become reality. To my surprise, they answered back with enthusiasm and were very willing to help. With the support of several volunteers, about 260 boxes filled with essential toiletries were made and are now being distributed to emancipated youth who move into their first own home and/or may be struggling to get by.

Ever since entering the foster system and receiving the help that I did, I have made it my duty and responsibility to give back and say “thank you” in one form or another. Thank you to those who help foster youth around the world each and every day because they believe in us and see more than what a report has to say. That is why I want to do what I do.

Casa de Amparo’s support helped plant the seed for this idea. I thank them for all the help they provided during my stay in New Directions. Throughout my stay, Penny, program director Linda Sullivan, and advocates Jimmy Whittenburge and Shawna Dobson helped me out a lot. They were always understanding of my situation and very comprehensive in their assistance.

Through the past several years, I have had my struggles just like anyone else. Nevertheless, I am happy and consider myself rich with what I have been able to obtain. I know my calling is to help out those who want to be helped and are in need, no matter their circumstance or situation. I am now 21 and on my way towards a Bachelor’s degree in human resources or psychology and hope to become a social worker. It may take awhile, but I know I will achieve my goal. To paraphrase Eleanor Roosevelt, I can tell you that I gain strength, courage, and confidence by every experience in which I stop and look fear in the face and am able to say, “I lived through this horror, I can take the next thing that comes along.” It empowers me each and every time!

Thank you all for empowering children who have been abused or neglected by being a donor to Casa de Amparo. Your commitment to end child abuse does not go unnoticed! 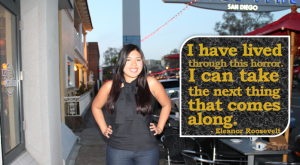